Forget boring mass-produced pet tags with zero personality. Design your own unique custom pet tags and start selling to new customers all over the world today! 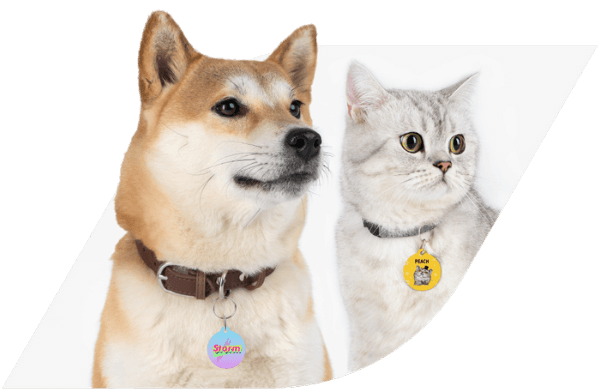 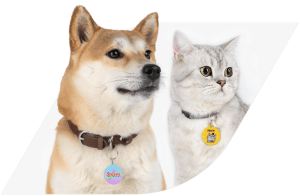 Make Your Own Customized Pet Tags and Start Selling

Create and sell as many customized pet tags as you want. No minimum quantity is required!

Customized pet tags can be highly profitable with low production costs and extremely attractive profit margins for you.

Stand out from the competition with full-color decoration on both sides and a glossy finish.

Why Make Custom Pet Tags and Sell Them Online?

Pet market sales are skyrocketing in the United States and around the world. This is a fast dynamic industry sector that offers unique opportunities to sell high-quality unique customized products such as custom cat tag and personalized dog tag products in potentially big numbers and with very attractive profit margins. 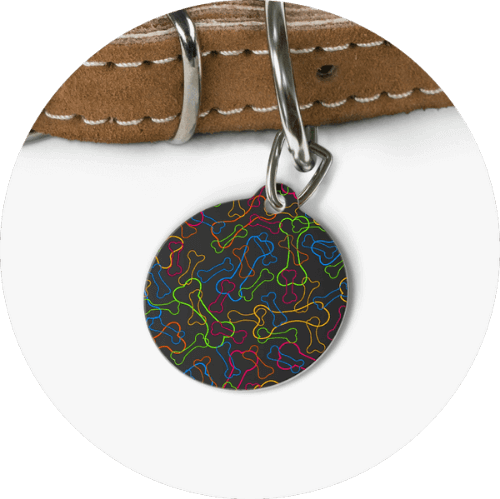 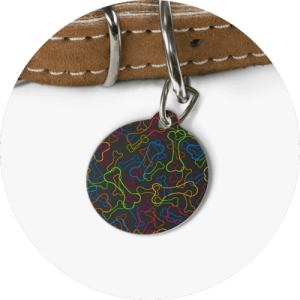 Two-Thirds of US Households Own a Pet!

According to a recent Statista report, the average US pet owner says they spend more than $500 on each of their pets annually, with more affluent Americans spending more than $1500. And while much of these figures are made up of expenditure on food and veterinary visits, pet owners are also spending more and more each year on custom pet tags and other accessories.

Pet industry expenditure in the United States was estimated to have hit 99 billion U.S. dollars in 2020. U.S. consumer expenditure on pet products has increased year-on-year for 25 years, growing around 560% in that time! Meanwhile, during the past 30 years, the number of households owning at least one pet has increased from 56% to 68%, meaning that two-thirds of households own at least one pet! Incidentally, Millennials are the single biggest ownership group so the direction of this ownership trend only seems upwards!

And, the important thing to remember is that this huge increase in demand isn’t just occurring in the United States. With eCommerce expanding all over the world and the middle class increasing in size in markets from Brazil to China, there have never been more customers out there who have the disposable income to spend on their pets!

The global pet industry is expected to be worth $270 billion by 2025! (Global Market Insights and Statista) And, as you might expect, much of this is being driven by online sales, with pet owners enjoying the convenience, comfort, product choice, and clear pricing comparisons through this medium. 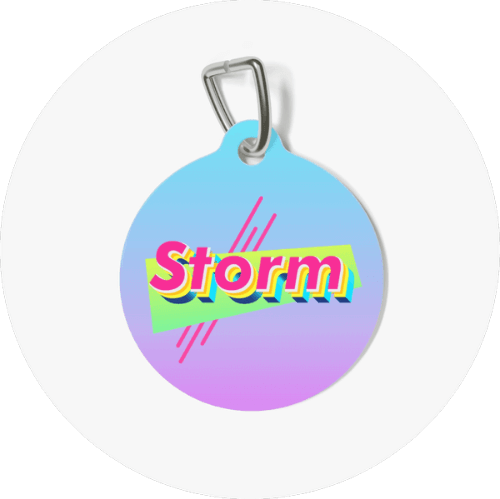 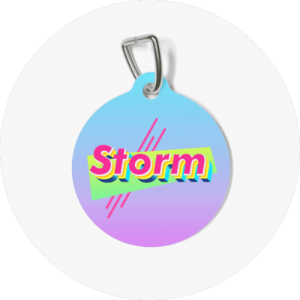 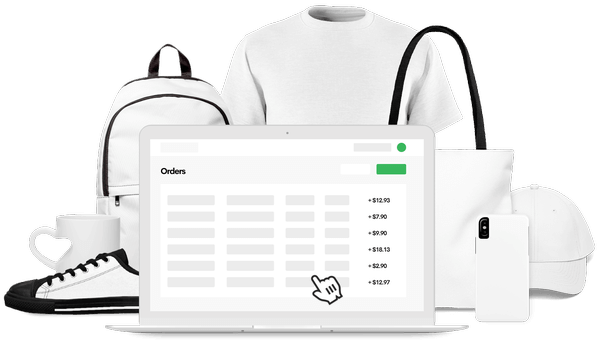 What Is Print on Demand? And Why Is It the Solution for You?

Print on Demand – or POD – is the activity of manufacturing products and then sending them to customers immediately after an online sale is completed.

Whereas traditional merchandising businesses are forced to invest in and hold inventory, POD services such as Printify offer the huge advantage of you not needing to manage, store, or protect your stock. You simply print the quantities that you have sold which are then sent custom pet tags directly to the customer!

Essentially, many of the risks and headaches of the traditional merchandiser business model have been eliminated, enabling you to concentrate on building your brand and unique product range!

Why Choose Printify as Your Partner?

Trust is something that is earned and in the case of Printify, we already have more than 300,000 store owners who trust Printify with their business. Join our amazing global community today!

Printify has more than 90 print provider locations all over the world allowing you to deliver your pet tags to your customers wherever they are on planet Earth.

By partnering with Printify, you are free to run your business exactly how you want without any outside interference. You can order one product or hundreds of your pet tags or other products in your shop. This means you don’t have the stress, risk, and expense of holding inventory.

Printify was, is, and always will be free to our customers. You only pay for shipping and product fulfillment once you've received an order in your online shop.

How Do You Create a Custom Pet Tag?

Here are 9 simple steps to creating your own unique custom pet tags: 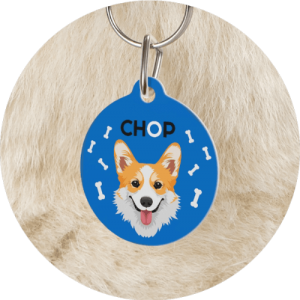 1) Pick a Product That You Want to Customize

In this case, you will be creating a custom pet tag.

2) Customize the Product Using the Designs You Have

Under the ‘choose your print provider’ section on the product page, there is a button that says ‘start designing’. You should click on this to open the Mockup generator.

On the mockup generator, you can see the print areas available for your pet tag. The available print areas differ depending on which print provider you choose.

4) Upload Your Designs Onto the Mockup Generator

You can do this by clicking on the ‘Add your designs’ button. Alternatively, drag & drop them from your device.

Use the mockup generator to try out different designs and design elements.

Once you have finished playing around with your designs, click ‘preview’  to see the generated real-life mockup.

Publish your new customized product on your online store using your mockup designs.

Order samples so that you can check the print quality and general look of the finished product you will be selling in your online store. Samples are also something you should consider for your own marketing purposes.

Wait for the orders to roll in! 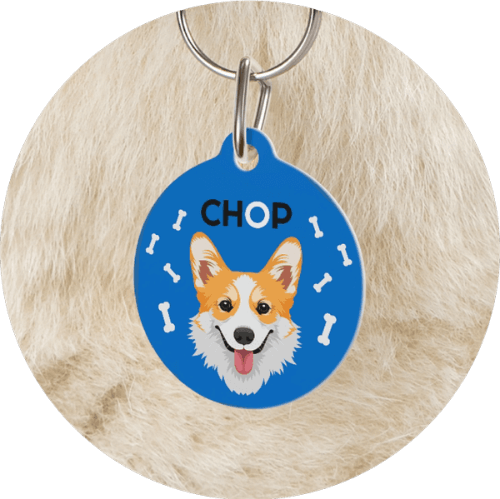 As we have described above, using the Printify online design tool, you assemble your pet tag design hassle-free. And remember that because your personalized dog tag and custom cat tag products are custom print, you can be as creative as you want!

The great thing is too that the more often you use Printify’s free design tools, the more skilled you will get at designing unique products that customers will be flocking to your online store to purchase! 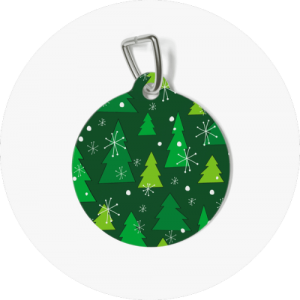 Custom pet tags work very well for holidays and celebrations. Remember some of the most popular ideas in life are the most simple! Think pet birthdays, the birth of kittens or puppies, or special occasions such as Easter, Diwali, and Christmas! Which date in the calendar is most popular for custom pet tags? Valentine’s Day! Lots and lots of pet owners out there love to spread the love with their pets on February 14 each year!

It has become popular for us human beings to wear colorful wristbands highlighting charities and causes we believe in. Pets too are joining in the fun and promoting good causes with a whole range of custom dog tag and custom cat tag designs highlighting everything from cancer awareness to women’s and animal rights. 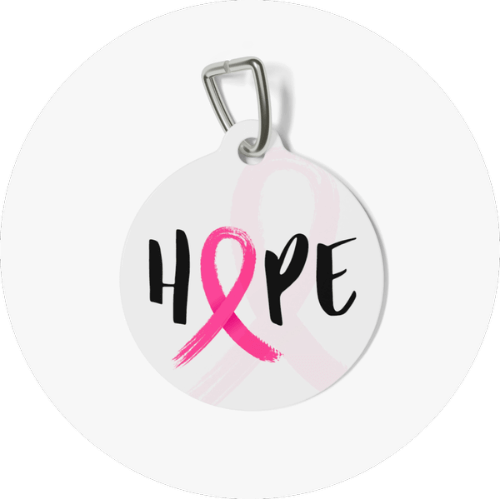 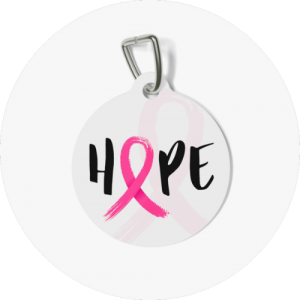 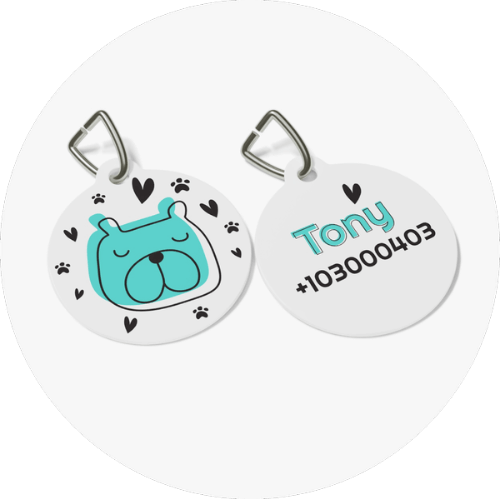 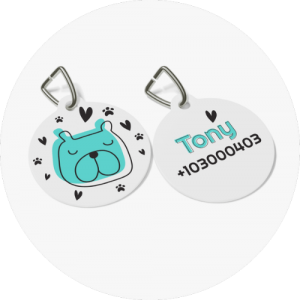 Getting Your Pet Home Safely if Lost

Of course, the original reasoning behind pet tags was so that lost pets could be reunited with their owners! This principle still sticks today for any pet owner who allows their pet some geographical freedom. Although serving a practical cause, all the same, these pet tags can still be magnificently designed and beautiful on the eye.

What’s in a Name?

One of the best-selling pet tag design ideas is selling pet name tags. You can easily add your contact details on the reverse in case the pet ever gets lost. 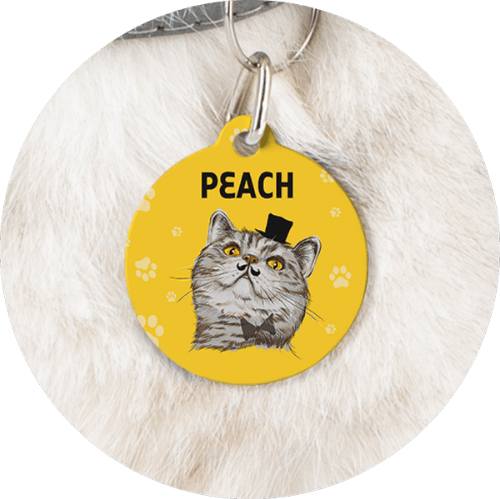 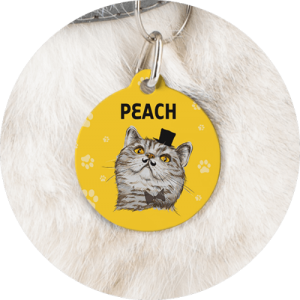 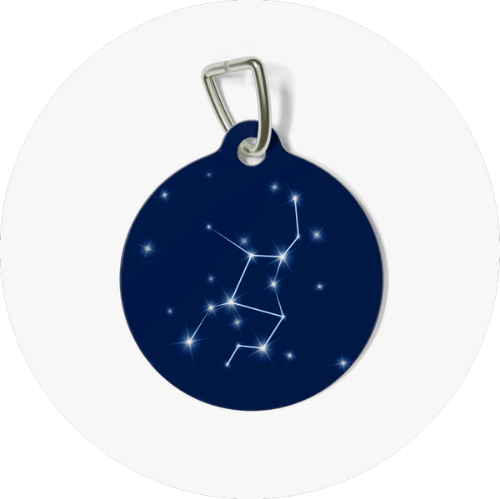 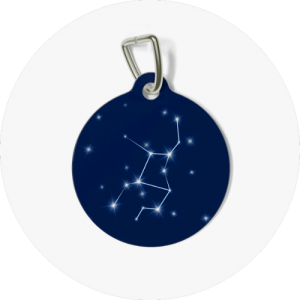 Do Dogs and Cats Have Star Signs?

We, humans, have star signs so why not pets?! There are lots of design ideas you can play with here using the 12-star signs of the Zodiac.

Print on Both Sides

Both Sides Are Flattened

A full-color decoration on both sides with a glossy finish.

No glued or “sandwiched” materials to wear out or fall apart.

The tag and clip are both made of metal. This increased durability comes in handy, as collar pieces can snag on brush, corners, etc. The base color is white, giving designs an even printing surface. 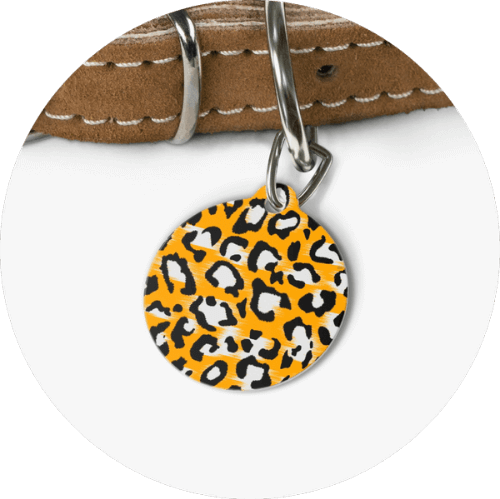 With a captive global market of millions out there, you are probably itching to get going selling your customized pet tags!

Start Your Own
Print-On-Demand Business!